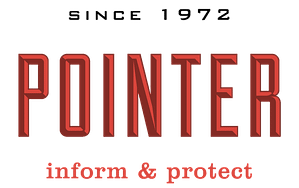 This year marks 50 years of Pointer being in business! Our customers, suppliers and amazing colleagues have all played a part in the success of Pointer and helping to progress the business.

So much has happened since Bob Rowan set the company up in 1972. Initially the business dealt with burglar alarms in and around Glasgow but demand grew and the business grew with it, creating a need for our first branch in England, not long after this. This was followed with the opening of the Major Projects Division in 1999. This was because of a gradual  change in the type of customer that we were working with. Today this is the largest part of the business and works mostly in the utilities and custodial sectors of the market. In 2016 we opened an office in Coventry and after growing the business in the South of England we opened an office on the South coast in Lee on the Solent in 2021.

Training and development is a core part of Pointer’s DNA. The first apprentice was recruited in 1978 and apprentices have been hired every year since. The recent launch of Learn Amp platform is the next stage in Pointer’s development journey.

Pointer Fire was opened in 2004 because many of our customers were asking us to quote for fire detection systems and we didn’t have sufficient expertise in house.

In 2001, Pointer established Pointer Asia in Bangkok, it deals with large blue chip clients in Bangkok. This was followed by businesses being set up in Oman in 2010 and The Philippines in 2013, both have a blue chip customer base.

Pointer has evolved over the decades as it has responded to changing customer requirements. There have been plenty of ups and downs along the way as the business has got better. Today, It is a well respected business by both customers and suppliers.

It is known for the can do attitude of its colleagues, their strong technical knowledge and a commitment to solving problems.

Thank you to everyone who has been a part of the Pointer journey, here is to another 50 years!

You can find out more about which cookies we are using or switch them off in settings.

This website uses cookies so that we can provide you with the best user experience possible. Cookie information is stored in your browser and performs functions such as recognising you when you return to our website and helping our team to understand which sections of the website you find most interesting and useful.

Strictly Necessary Cookie should be enabled at all times so that we can save your preferences for cookie settings.

If you disable this cookie, we will not be able to save your preferences. This means that every time you visit this website you will need to enable or disable cookies again.

You can at any time change or withdraw your consent from the Cookie Declaration on our website.

Your consent applies to the following domains: www.pointer.co.uk

As most of the online services, our website uses cookies first-party and third-party cookies for a number of purposes. The first-party cookies are mostly necessary for the website to function the right way, and they do not collect any of your personally identifiable data.

The third-party cookies used on our websites are used mainly for understanding how the website performs, how you interact with our website, keeping our services secure, providing advertisements that are relevant to you, and all in all providing you with a better and improved user experience and help speed up your future interactions with our website.

Essential: Some cookies are essential for you to be able to experience the full functionality of our site. They allow us to maintain user sessions and prevent any security threats. They do not collect or store any personal information. For example, these cookies allow you to log-in to your account and add products to your basket and checkout securely.

Statistics: These cookies store information like the number of visitors to the website, the number of unique visitors, which pages of the website have been visited, the source of the visit etc. These data help us understand and analyze how well the website performs and where it needs improvement.

Preferences: These cookies help us store your settings and browsing preferences like language preferences so that you have a better and efficient experience on future visits to the website.